On 7 June the Dutch BizTalk User Group landed in the Science Park in Amsterdam. The rather new middleware oriented company ESTREME took care for the hosting. The room was filled good with more than 40 attendees.

As always there were 4 presentations:

After a short introduction from Bert van Ark about Estreme, Tim Jonker showed a tool he created to give insight in message flow through BizTalk. Because this data is stored in a round-robin database, you get the possibility to draw graphs in which you can see trends. Based on these trends you can plan upgrades of your BizTalk application and/or do capacity planning.

Although this is just a simple tool, it certainly has potential and Tim received great feedback on it!

The second session was presented by BizTalk MVP Gijs in ‘t Veld from Motion10. What he showed was actually a shortened version from the session he will do at the SOA & Cloud Symposium in London, the 24th of September.
After showing how an Enterprise Integration Landscape can look like and the evolution from integration patterns, Gijs showed the current on-premise and cloud integration possibilities with the Microsoft platform. It became even more interesting when Gijs started describing when to use which technology, hybrid scenarios and the future of integration with Microsoft. He ended with mentioning a couple of the possibilities and challenges when in comes to hybrid solutions.

Based on feedback from a previous BTUG session, Microsoft was asked to do a presentation on how the future of Integration on the Microsoft Platform looks like. Dick Dijkstra, already a frequent visitor of the Dutch BTUG who now works for Microsoft, gladly accepted the invitation and did an entertaining presentation/discussion.

Dick started to tell about the transition period we are at, since Windows Azure is a runner up, but still has to be improved, to become adapted on a large scale. He continued to tell about the history from BizTalk and the upcoming release 2010 R2. An exciting part of his presentation was about the possibilities which arise with IaaS (Infrastructure as a Service), enabling, for example, to provision a BizTalk developer a persistent (virtual) BizTalk environment in the cloud!
Dick also told about the possible improvements for BizTalk and the on-going investments Microsoft puts in BizTalk, although this is less than say 5/6 years ago.
He ended with incentive questions like ‘Integration in the cloud (BizTalk Paas) will be the new standard’, ‘Microsoft should release a new (revolutionary) version of BizTalk after 2010R2’ and ‘The new Azure IaaS capabilities will replace traditional dev/test environments’.

The last presentation of the evening was a user case. Hugo Brouwer told about his assignment at Estro Groep, a parent company for almost 600 childcare organisations with about 6600 employees. The goal of his project was to achieve cost reduction and efficiency by centralising staff departments to a Shared Service Center, centralising ICT means and maintenance and merging the separate financial departments. 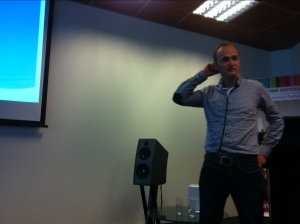 As always pressure was high. In about 3 months he had to create an infrastructure based on BizTalk, which enabled Estro Groep to facilitate application and infrastructure consolidations, acquisitions and the reduction of manual imports/exports.
At Estro Groep BizTalk is used for amongst others distribution of master data, asynchronous processing of transactions and EAI to backend applications and vice versa. Hugo showed some interesting pictures about the complexity of the new environment. He ended with a couple of questions to the audience, with which he requested for comments on his work at Estro Groep.

After the presentations there was enough time for a drink and a chat.

Thanks to the people of Estreme and the organisation of the Dutch BTUG for organising another great meeting!

This entry was posted in Dutch BTUG. Bookmark the permalink.